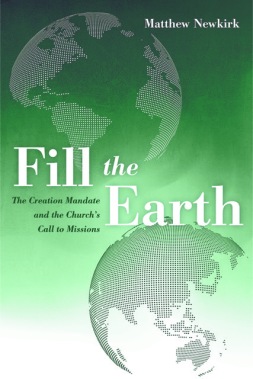 What does the image of God have to do with missions? In my view, everything.

After making the case that we need to go back to creation to begin our exploration of mission in the Bible, chapter 1 of Fill the Earth examines what it means for God to create humanity as His image.

You’ll notice that I didn’t use the typical language here of God creating humanity “in” His image; rather, I said that God created humans “as” His image. There is a significant reason for this that bears substantial dividends for our understanding of biblical mission.

Most of the time, in my experience, the “image of God” is viewed as some part of us. We often hear the phrase “the image of God in us” or we refer to people as “image bearers” of God. This language suggests that the image of God is some portion of us or perhaps something external to us that we carry around with us. The Biblish translation “created in the image of God” doesn’t help this situation, since people often interpret this as meaning that God’s image is something that is “in” us. But this is not the case.

You ARE God’s Image

In Fill the Earth, I argue that Gen 1:26 is best translated as, “Let us make humanity as our image.” That is, as human beings we are the image of God in our very essence (as an aside, this is exactly how the 2017 Japanese Shinkaiyaku translation renders this clause!). When we understand this phrase in this way and take into account the ancient Near Eastern context of “image,” humanity’s mission in the garden of Eden becomes clear.

In the ancient Near East, kings would erect and distribute “images” (i.e., statues) of themselves throughout their kingdoms in order to represent the extent of their authority. However far and wide the images were distributed, that’s how great and glorious the reign of that king was.

For God to create humanity as His image, therefore, indicates that our function as human beings is to represent God’s kingship here on the earth. Just as the inanimate statue-images represented the reigns of ancient kings, so do we as living images represent the reign of God the Supreme King. And as was the case with ancient kings, however far and wide God’s images spread, that’s how great and glorious His kingship is. So how far and wide has decreed that His images should spread and represent His kingship?

Our Mission: Represent God’s Kingship to the Ends of the Earth

The creation mandate contains God’s first reported speech to humanity in the Bible, in which God commissions His images to “be fruitful and multiply and fill the earth.” My thesis throughout the book is that this verse relays to us God’s mission for his people: to represent His kingship to the ends of the earth.

This understanding of humanity’s mission at creation is necessary for us to understand what God expects His people to be doing in this world. In the gospel, God doesn’t simply save us so that we’ll be forgiven; He saves us in order to restore us to our good creational calling of representing His kingship to the ends of the earth. The remainder of the book seeks to show how this is the case.

For more info, go to filltheearthbook.com. To purchase, go to: